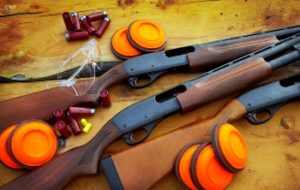 Wild Cat is a combination of trap, five stand, and sporting clays. There are five positions like trap, but each position is only around 5 yards behind the trap house. There are at least 9 other traps spread around the field, but unlike five stand, the shooter is not informed regarding which targets they will get for any particular station. Targets can come left, right, overhead, high, low, dropping, in true pairs, following pairs, report pairs, simos, etc.).

Wildcat is held Friday afternoons from 1 p.m. to dusk and Sundays starting at 9 a.m.